Variation in Communities of Seed-Dispersing Ants in Habitats with Different Disturbance in Knox County, Ohio 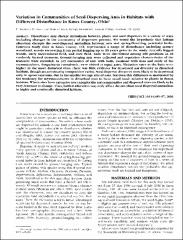 Disturbance may disrupt mutualisms between plants and seed dispersers in a variety of ways including changes in the community of dispersers present. We tested the hypothesis that habitat alteration disrupts the seed-dispersal mutualism between ants and spring-flowering, perennial herbs. Fourteen study sites in Knox County, OH, represented a range of disturbance including mature woodland, woods recovering from partial logging up to 30 years prior to the study, recently logged woods, early successional field, and corn field. Baits were distributed among 480 positions in 48 randomly located transects. Ground-foraging ants were collected and vegetation characteristics of the transects were recorded. In 315 encounters of ants with baits, locations with tuna and seeds of the myrmecochore, Sanguinaria canadensis, were visited at equal rates. Visitation rates to the baits were higher in the more disturbed sites. There was little evidence for depressed ant diversity in disturbed habitats, though ant community composition varied. Seed dispersal distances were likely to be depressed only in agroecosystems, due to the smaller average size of ants, but even this difference is moderated by the tendency for myrmecochores in disturbed sites to have small seeds relative to plants in forest habitats. Where sites have extensive tree canopies the ant communities and dispersal rates are likely to be very resistant to change. Thus, habitat alteration may only affect the ant-plant seed dispersal mutualism in highly and continually disturbed habitats.