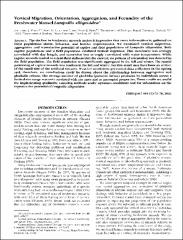 The decline in freshwater mussels makes it imperative that more information be gathered on their population status, behavior, and habitat requirements. We examined vertical migration, aggregation, and reproductive potential of captive and field populations of Lampsilis siliquoidea. Both captive populations and a field population exhibited vertical migration. This movement was strongly correlated with day length, and somewhat less strongly correlated with water temperature. While captive mussels tended to orient their siphons into the current, no pattern of orientation was detected in the field population. The field population was significantly aggregated in the fall and winter. The spatial patterning of captive mussels was random in the fall and winter, but this result may have been an artifact of the small size of the artificial streams. Weather conditions prevented data collection in the spring and, therefore, no conclusions could be drawn about the relationship between aggregation and glochidia release. The average number of glochidia (parasitic larvae) produced by individuals across a limited size range was not correlated with any maternal or marsupial properties. These results are useful for implementing qualitative sampling methods under optimum conditions and for information on the reproductive potential of Lampsilis siliquoidea.