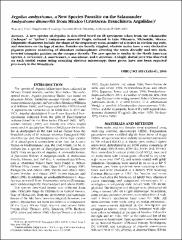 A new species of Argulus is described based on 18 specimens taken from the salamander (achoque or ajolote) Ambystoma dumerilii Duges, collected in Lake Patzcuaro, Michoacan, Mexico. Diagnostic characters include the shape of the respiratory areas, number of sclerites in suction cup rods, and structures on the legs of males. Females are heavily stippled, whereas males have a very distinctive pigment pattern consisting of abundant melanophores covering the testes dors ally and two dark, inverted triangular patches on the carapace dorsally. The new species is similar to the North American species, A versicolor,A. americanus, A. maculosus, and A diversus. A single, dorsal pore was observed on each caudal ramus using scanning electron microscopy; these pores have not been reported previously in the Branchiura.