The Tawawa Woods Natural Landmark: I. Survey of Flora and Land Use History 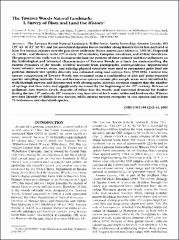 The Tawawa Woods Natural Landmark, Wilberforce, Xenia Township, Greene County, OH (39° 43' N, 83° 52' W), and the associated riparian forest corridor along Massies Creek has nurtured at least five human cultures over the past three millennia: Native Americans (Adena ca. 1000 BC, Hopewell ca. 100 BC, and Shawnee in the 17th to early 19th centuries), European Americans, and African Americans. The purpose of this study was to document the land use patterns of these cultures and their influences on the hydrological and botanical characteristics of Tawawa Woods as a basis for understanding the current dynamics of the woods. Archival accounts from photographs, correspondence, departmental board minutes, surveys, maps, and existing physical structures were used to reconstruct prior land use patterns. Historic tree species diversity was estimated using land surveys from 1799-1856. Current tree species composition of Tawawa Woods was estimated using a combination of plot and point-centered quarter sampling methods. Tree and herbaceous species outside plot sample areas were identified by walk-through surveys and documented with photographs. Historic accounts suggest that the number of springs and flow rates had significantly decreased by the beginning of the 20th century. Release of pollutants into Massies Creek, deposits of refuse into the woods, and continued demand for lumber during the late 19th and early 20th centuries may have altered both water tables and biodiversity. Witness tree data identify 15 different tree species, while current surveys recognize 31 tree species and at least 79 herbaceous and vine/shrub species.