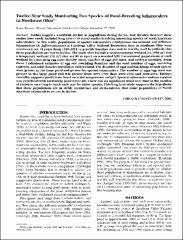 Studies suggest a worldwide decline in amphibians during the last four decades, however these studies have rarely included long-term (>10 years) studies involving interacting species of North American salamanders. In this study, populations of spotted salamanders (Ambystoma maculatum) and Jefferson Salamanders (A. jeffersonianuni) at Cuyahoga Valley National Recreation Area in northeast Ohio were monitored for 12 years from 1990-2001 to provide baseline data and to test the null hypothesis that these populations are not in decline. The study sites include a semipermanent wetland (ca 1500 m2) and a temporary wetland (10 m2) that are 80 m apart on a wooded hill. I monitored populations at each wetland by estimating egg mass density, mean number of eggs per mass, and embryo mortality. From these I calculated estimates of egg and hatchling densities and the total number of eggs, surviving embryos, and adult females breeding at each wetland. The densities of eggs and hatchlings of each species were greater in the large pond and greater for spotted salamanders. The number of eggs/egg mass was greater in the large pond and was greater from 1995-1999 than 1990-1994 and 2000-2001. Embryo mortality supports predictions based on water temperature and pH. Spotted salamander embryo survival was correlated with increasing pond water pH. There was no significant trend over time in the number of embryos surviving to hatch each year for either species. This long-term study supports the hypothesis that these populations are in stable coexistence and demonstrates that some populations of North American salamanders are not in decline.