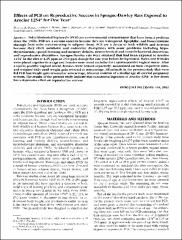 Polychlorinated biphenyls (PCB) are environmental contaminants that have been a problem since the 1960s. PCB are a serious concern because they are widespread, lipophilic, and bioaccumulate through food webs concentrating in adipose tissue. PCB are a threat to both wildlife and humans because they elicit metabolic and endocrine disruptions with some problems including hypothyroxinemia, spatial learning and memory deficits, neurochemical and neurobehavioral alterations, and reproductive alterations. Sprague-Dawley rats were obtained that had been exposed to Aroclor 1254® in the diet at 1.25 ppni or 25.0 ppm dosage for one year before being mated. Males and females were placed together in a cage and females were tested each day for a sperm-positive vaginal smear. After a sperm positive vaginal smear, females were housed separately, maintained on their respective diets, and weighed daily until weight gain reversal or miscarriage. All animals in the present study that were fed PCB had weight gain reversal or miscarriage, whereas controls of a similar age all carried pregnancy to term. The results of the present study indicate that continuous ingestion of Aroclor 1254® at low doses has a depressive effect on reproductive success.