Distribution in Time, Provenance, and Weathering of Gravestones in Three Northeastern Ohio Cemeteries 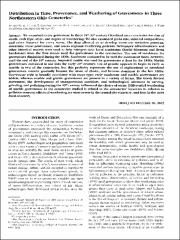 We examined every gravestone in three 19th-2 0th century Cleveland area cemeteries for date of death, rock type, style, and degree of weathering. We also examined grain size, mineral composition, and other features for every stone. The data allowed us to develop stone-use seriation patterns, determine stone provenance, and assess regional weathering patterns. Newspaper advertisements and other historical records were used to help interpret data. Local sandstones (Euclid bluestone and Berea Sandstone) were the first stones used for gravestones in the cemeteries. The use of sandstone for gravestones diminished during the 1830s. Sandstone continued to be used for monument bases, however, until the end of the 19th century. Imported marble was used for gravestones at least by the 1830s. Marble gravestones remained in use into the early 20th century. Use of granite appears to begin as early as marble in two of the cemeteries, but this probably represents the use of replacement or antedated gravestones. Granite gradually became the stone of choice, and became dominant in the late 1800s. Gravestone style is broadly correlated with stone type: early sandstone and marble gravestones are tablets, whereas marble and granite gravestones are present in a variety of forms. The Greek Revival movement, the development of transportation corridors, and technological advances in carving, grinding, and polishing during the 19th century influenced the choice of stone. Differential weathering of marble gravestones in the cemeteries studied is related to the cemeteries' locations in relation to pollution sources: effects of weathering are most severe in the central city cemetery, and least in the most rural cemetery.