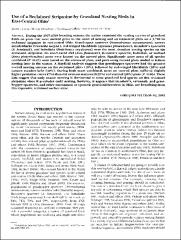 During the 1997-1998 breeding seasons the author examined the nesting success of grassland birds on plots that were mowed prior to the onset of nesting and on unmowed plots on a 3,700 ha reclaimed stripmine in east-central Ohio. Grasshopper sparrows (Ammodramus savannarum), eastern meadowlarks (Sturnella magnci), red-winged blackbirds (Agelaius pboeniceus^), Henslow's sparrows (A. henslowiO, and bobolinks (Dolichonyx oryzivorus^ were the most abundant nesting species on the reclaimed stripmine. No short-eared owl (Asio JTammeus}, Henslow's sparrow, bobolink, or mallard (Anas platyrhynchos) nests were located on the mowed plots. Significantly more nests of all species combined (P <0.05) were found on the unmowed plots, and pairs using mowed plots tended to initiate nesting later in the season. A Mayfield analysis suggests that grasshopper sparrows had the greatest overall nesting success on the reclaimed plots (46%), followed by red-winged blackbirds (30%) and eastern meadowlarks (30%). During both years combined, nests on mowed plots suffered slightly higher predation rates (47%) than did nests on unmowed (39%) and control (38%) plots (P >0.05). These data suggest that early season mowing is detrimental to some grassland bird species on this reclaimed stripmine since it precludes early nesting; however, it appears that Henslow's, savannah, and grasshopper sparrows, and other uncommon or sporadic grassland breeders in Ohio, are benefiting from this expansive, reclaimed surface mine.