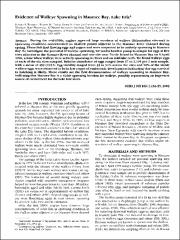 During the mid-1990s, anglers reported large numbers of walleye (Stizostedion vitreum) in spawning condition concentrated on shallow points adjacent to the Maumee River channel during spring. These fish had flowing eggs and semen and were suspected to be actively spawning in Maumee Bay. To investigate the potential of walleye spawning, we used a benthic pump to sample for eggs at five sites adjacent to the Maumee River channel and one site near Turtle Island in Maumee Bay on 5 April 1998, a time when walleye were actively spawning in rivers and on mid-lake reefs. We found walleye eggs at each of the six sites sampled. Relative abundance of eggs ranged from 17 to 2,105 per 2-min sample, with a mean of 459 (±232). Egg viability ranged from 33 to 54% across the sites and 10% of the viable walleye eggs were observed to be in late stages of embryonic development indicating that egg survival to hatching is likely. These results are the first documentation of walleye spawning in Maumee Bay, indicating that Maumee Bay is a viable spawning location for walleye, possibly representing an important source of recruitment for the Lake Erie stock.