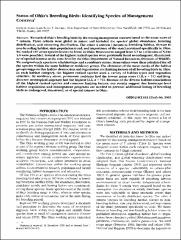 We ranked Ohio's breeding birds by decreasing management concern based on the mean score of 7 criteria. Three criteria were global in nature and included the species' global abundance, breeding distribution, and wintering distribution. The other 4 criteria (threats to breeding habitat, threats to non-breeding habitat, state population trend, and importance of the state) pertained specifically to Ohio. We ranked 187 avian species known to breed in Ohio. Mean scores ranged from 3.7 to 1.0 (scores of 5-0 to 1.0 were possible). Several of the highest ranked species were previously listed as endangered, threatened, or of special interest at the state level by the Ohio Department of Natural Resources, Division of Wildlife. We assigned each species to a habitat type and a residency status. Mean values were then calculated for all the species within the same habitat or residency group. The closeness of the mean ranks of the habitat groups suggests that habitat destruction and degradation are limiting factors of all breeding birds in Ohio. In each habitat category, the highest ranked species used a variety of habitat types and vegetation structure. By residency status, permanent residents had the lowest mean score (1.8, n = 21) and longdistance neotropical migrants had the highest (2.6, n = 74). Because of the diverse habitat associations of the highest ranked species and common limiting factors, our results suggest that landscape-level habitat acquisition and management programs are needed to prevent additional listing of breeding birds as endangered, threatened, or of special interest in Ohio.