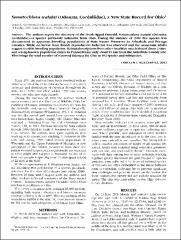 The authors report the discovery of the Brush-tipped Emerald, Somatochlora walshii (Odonata: Corduliidae)—a species previously unknown from Ohio. During the summer of 2000 this species was documented in apparent breeding populations at State Nature Preserves in Ashtabula and Portage counties. While no larvae were found, reproductive behavior was observed and the numerous adults suggest a stable breeding population. Habitat descriptions from other localities match that of these 2 sites, and a long-known population exists in Pennsylvania only about 21 km from the Ashtabula County site. This brings the total number of reported Odonata for Ohio to 162 species and subspecies.