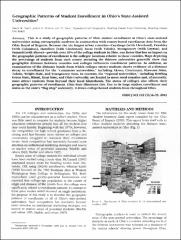 This is a study of geographic patterns of Ohio student enrollment at Ohio's state-assisted universities using cartographic analyses in conjunction with county-based enrollment data from the Ohio Board of Regents. Because the six largest urban counties—Cuyahoga (with Cleveland), Franklin (with Columbus), Hamilton (with Cincinnati), Lucas (with Toledo), Montgomery (with Dayton), and Summit (with Akron)—provide over 50% of the college students in Ohio, one factor that has an impact on the geographic patterns of enrollment is the colleges' locations relative to those counties. Maps depicting the percentage of students from each county attending the thirteen universities generally show that geographic distance between counties and colleges influences enrollment patterns. In addition, an examination of the distance bands from which colleges attract students shows evidence of a distance decay in enrollment for the commuter universities, including Akron, Cincinnati, Shawnee State, Toledo, Wright State, and Youngstown State. In contrast, the regional universities, including Bowling Green State, Miami, Kent State, and Ohio University, are located in more rural counties and, of necessity, must attract students from beyond their local hinterlands. The status of colleges also affects their geographic patterns of enrollment. Ohio State illustrates this. Due to its large student enrollment and status as the state's flag ship university, it draws college-bound students from throughout Ohio.