The Dainty Sulphur Butterfly in Ohio 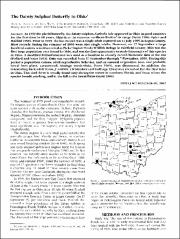 In 1999 the pierid butterfly, the dainty sulphur, Nat halts iole appeared in Ohio in good numbers for the first time in 68 years. Ohio is at the extreme northern limit of its range (Scott 1986; Opler and Malikul 1998). Prior to 1999, the last record was a single adult captured on 11 July 1985 in Logan County. Most records during the summer of 1999 were also single adults. However, on 17 September a large localized colony was discovered at Pickerington Ponds Wildlife Refuge in Fairfield County. This was the first large population ever found in Ohio, and was the first opportunity to study bionomics of this species in Ohio. A modified Pollard transect was used as a baseline to visually record bionomic data at the site (Pollard and Yates 1993). Data was recorded from 17 September through 7 November, 1999- During this period a population census, adult reproductive behavior, and an unusual oviposition host, and probable larval host plant, carpetweed, Mollugo verticellata, (Voss 1985), was discovered. In addition the interesting dark adult form,/ viridis, (Whittaker and Stallings 1944) was recorded for the first time in Ohio. This dark form is usually found only during the winter in southern Florida and Texas where the species breeds yearlong, and in the fall in the Great Plains (Scott 1986).