Civil Aircraft Collisions with Birds and Other Wildlife in Ohio, 1990-1999 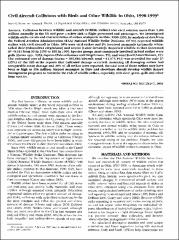 Collisions between wildlife and aircraft (wildlife strikes) cost civil aviation more than \$380 million annually in the US and pose a safety risk to flight personnel and passengers. We investigated wildlife strike trends and characteristics of strikes at airports in Ohio, 1990-1999, by analysis of data from the Federal Aviation Administration (FAA) National Wildlife Strike Database. Of 903 reported wildlife strikes with civil aircraft in Ohio, 98% were bird strikes and 2% involved mammals (primarily whitetailed deer [Odocoileus virginiana] and coyote [Cants latrans]). Reported wildlife strikes increased (P <0.01) from 39 in 1990 to 165 in 1999- Species groups most commonly involved in bird strikes were gulls (Larus spp., 135), raptors (Falconiformes and Strigiformes, 55), and waterfowl (Anseriformes, 49). The estimated cost of damage (mean - \$85,8l6/aircraft; total = \$3,175,192) was provided for only 37 (29%) of the 126 strike reports that indicated damage occurred. Assuming all damaging strikes had comparable mean damage and 20% of all strikes were reported, the total cost of these strikes may have been as high as \$54 million. Airport managers in Ohio and elsewhere should develop wildlife hazard management programs to minimize the risk of wildlife strikes, especially with deer, geese, gulls and other large species.

Author Institution: US Department of Agriculture