Does Topography Affect the Colonization of Lonicera Maackii and Ligustrum Vulgare in a Forested Glen in Southwestern Ohio? 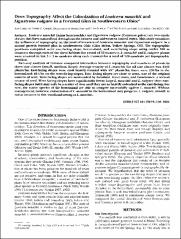 Lonicera maackii (Amur honeysuckle) and Ligustrum vulgare (Common privet) are two exotic shrubs that have naturalized throughout the eastern and midwestern United States. This study examines the influence of topography on the level of invasion of Lonicera maackii and Ligustrum vulgare in a second growth forested glen in southwestern Ohio (Glen Helen, Yellow Springs, OH). The topographic positions compared were east-facing slope, bottomland, and west-facing slope using twelve 100 m transects through each of the three habitats for a total of 36 transects. L. maackii andZ. vulgare plants were counted in ten 3 x 3 m quadrats along each transect for a total of 120 quadrats per topographic position. Two-way analysis of variance compared interaction between topography and numbers of plants in three size classes (small, medium, large). Average density of L. maackii for all size classes was 1136 plants/ha. East-facing slopes were most heavily invaded with 497 plants/ha; there were 238/ha in the bottomland; 401/ha on the west-facing slopes. East- facing slopes are close to town, one of the original sources of seed. West-facing slopes are surrounded by farmland, fence rows, and farmhouses, a second source of seed. West-facing slopes have significantly fewer large L. maackii and L. vulgare than eastfacing slopes but it may only be a matter of time until they are as heavily colonized as the east-facing. For now, the native species of the bottomland are able to compete successfully against L. maackii. Without management, however, colonization ofZ. maackii in the bottomland may progress. L. vulgare, overall, is not as invasive in this woodland setting asZ. maackii.