Neutral Net Methodology in the Context of Evolving Economic Systmes 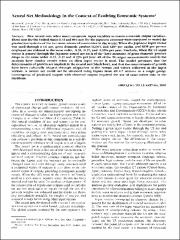 Five neural nets relate macro-economic input variables to macro-economic output variables. Three nets for the United States (US) and two nets for the Japanese economy were computed to model the production systems of the two most advanced economies in the world. When the Japanese input vector was used through a US net, gross domestic product (GDP), and GDP per capita, and GDP per person employed are reduced in the same order, -0.38, -0.37, and -0.39% per year. Similarly, when the US input vector is passed through the Japanese neural net each of the three measures of gross domestic product drops in the same order -0.22, -0.22 and -0.23% per year. All of the 20 output measurements used in the analysis have similar results when an alien input vector is used. The model presumes that the determinants of growth are implicit in the neural net (black box), and that the determinants of growth have been culturally shaped through adaptation to the norms and values reflected in the input vectors. A neural net could not be obtained using inputs from all G7 nations as a single group. Convergence of predicted outputs with observed outputs required the use of same-nation data in the iterations.