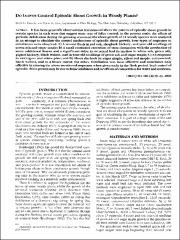 It has been generally observed that leaf removal alters the pattern of episodic shoot growth in certain species in such ways that suggest some type of foliar control. In the present study, the effects of periodic defoliation during the growing season on the shoot growth of 11 woody species were analyzed in an attempt to elucidate the control mechanisms of episodic shoot growth. Four types of responses to defoliation were observed: A) A second flush in red oak, shagbark hickory, and year-old seedlings of green ash and sugar maple; B) A small continued extension of stem elongation with the production of some additional leaves and a significant delay in terminal bud formation in white ash, green ash, pignut hickory, black walnut, and in year-old seedlings of green ash and sugar maple; C) No response in sweetgum and white pine; and D) Shoot die-back in sugar maple, silver-red maple, cottonwood, black walnut, and to a lesser extent, the ashes. Defoliation was most effective and sometimes only effective in causing the above-mentioned responses when given early in the flush period. Leaf control of episodic shoot growth may be due to foliar inhibitors and/or effects of competition for water and nutrients.