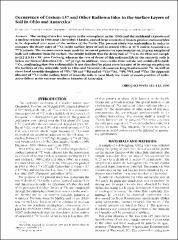 The testing of nuclear weapons in the atmosphere in the 1960s and the accidental explosion of a nuclear reactor in 1986 near Chernobyl, Ukraine, caused large amounts of fission-product radionuclides to be deposited over most of the surface of the Earth. The present study was undertaken in order to compare the decay rates of l37Cs in the surface layer of soil in central Ohio at 40°N and in Antarctica at 77°S latitude. The measurements were made by means of gamma-ray spectrometry on 10 gram samples of bulk soil collected from the surface. The results indicate that the decay rate of l37Cs in the Ohio soil sample is (2.2 ± 0.8) x 10 ' pico Curies/g, whereas the rate of decay of this radionuclide in the antarctic soils is below the limit of detection (<1 x 102 pCi/g). In addition, roots in the Ohio soil do not contain detectable 137Cs, confirming that this radionuclide is not absorbed by plant roots because of its strong absorption on the surfaces of clay minerals. Soils in Ohio and Antarctica do contain long-lived unstable 40K, as well as short-lived unstable daughters of 238U (214Pb and 214Bi) and of 232Th (228Ac, 212Pb, 208Tl, and 228Th). The apparent absence of 137Cs in the surface layer of antarctic soils is most likely the result of nondeposition of radioactive fallout at the extreme southern latitudes of Antarctica.