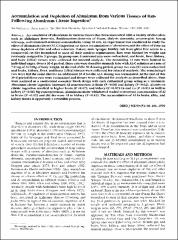 Accumulation of aluminum in various tissues has been associated with a variety of disorders such as Alzheimer dementia, Parkinsonism-dementia of Guam, dialysis dementia, amyotrophic lateral sclerosis, and vitamin D-resistant osteomalacia. Using 18 rats, an experiment was conducted to study the effect of aluminum citrate (AL-C) ingestion on tissue accumulation of aluminum and the effect of time on tissue depletion of this and other minerals. Mature, male Sprague Dawley rats were given free access to a commercial rat diet formulated to meet all their nutrient requirements. Rats were blocked by weight and randomly assigned to 3 groups. In group one, 6 untreated rats were euthanized, and brain, liver, kidney, and bone (tibia) tissues were collected for mineral analysis. The remaining 12 rats were housed in individual cages. Over a 30-d period, these rats were dosed by stomach tube with AL-C solution at a rate of 7.0 mg of Al/lOOg of body weight. At the end of the 30-d dosing period, group two rats (6) were euthanized and brain, kidney, liver, and bone (tibia) tissues were collected for mineral analysis. The remaining 6 rats were fed the same diet for an additional 30 d but the Al-C dosing was terminated. At the end of this 30-d period these rats were euthanized and tissues were collected for analysis as described above. Data were analyzed as a randomized complete block design with each euthanized group acting as a treatment. Aluminum citrate ingestion increased Al concentration in brain (P <0.08) and kidney (P <0.02). Aluminum citrate ingestion resulted in higher brain (P <0.07), and kidney (P <0.07) Ca and Cu (P <0.01) as well as kidney (P <0.06) Mg concentrations. Aluminum citrate withdrawal tended to decrease concentration of Al in brain (P <0.15) and did decrease Al in kidney (P <0.03). The accumulation of Al in brain, tibia, and kidney tissues is apparently a reversible process.