Spatial and Temporal Changes in Bacterial Assemblages of the Cuyahoga River 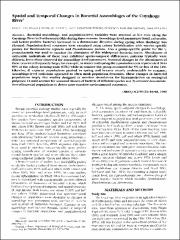 Bacterial assemblage- and population-level variables were assessed at five sites along the Cuyahoga River in Northeastern Ohio during three seasons. Assemblage-level parameters (total, culturable, and lactose-positive bacteria) increased in a downstream direction during spring when discharge was elevated. Population-level responses were examined using colony hybridization with species-specific probes for Burkholderia cepacia and Pseudomonas putida. Also a group-specific probe for the yproteobacteria was used to monitor the abundance of this widespread bacterial taxon. Abundances of culturable individuals of these taxa exhibited spatio-temporal differences; patterns typically were different from those observed for assemblage-level parameters. Seasonal changes in the abundances of these taxa were frequently large; for example, in winter and spring the y-proteobacteria represented 20 to 80% of the colony forming units (CFU) while in summer this group accounted for 5% or less of the CFU. Likewise, B. cepacia populations peaked in spring and became nearly undetectable in summer. Assemblage-level variations appeared to often mask population dynamics. These changes in bacterial populations imply that studies designed to monitor abundances for bioremediation or ecological purposes: 1) must account for seasonal blooms of bacteria of different species and 2) consider documentation of bacterial populations to detect more sensitive environmental responses.