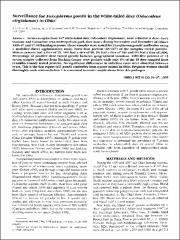 Serum samples from 147 white-tailed deer, Odocoileus virginianus, were collected at deer-check stations and Columbus area metropolitan park deer hunts during November and December of Ohio's 1996-97 and 97-98 hunting seasons. These samples were tested for Toxoplasma gondii antibodies using a modified direct agglutination assay. Forty-four percent (65/147) of the samples tested positive. Sixteen percent had a titer of 25, 16% had a titer of 50, 3% had a titer of 250 and 9% had a titer of >500. Percentage of positive deer varied greatly between geographical locations. Fifty-five percent of 45 serum samples collected from Hocking County were positive while only 6% of the 18 deer sampled from Franklin County tested positive. No significant differences in infection rates were observed between sexes. This is the first report of T. gondii antibodies from a game animal in Ohio. Pregnant women should thoroughly cook venison before it is consumed to avoid complications from this pathogen.