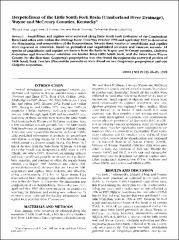 Amphibians and reptiles were surveyed along Little South Fork (tributary of the Cumberland River) and other sites within the drainage basin from May-October 1996 and April-May 1997 to determine the distribution and composition of the herpetofauna. Twenty-three species of amphibians and reptiles were captured or observed. Based on published and unpublished accounts and museum records, 41 species of amphibians and reptiles are known from the basin in Wayne and McCreary counties. Chelydra serpentina and Sternotherus odoratus are known from Little South Fork, and the latter from Wayne County, for the first time. Graptemys geographica was distributed throughout the surveyed portion of Little South Fork. Leeches (Placob delta parasitical were found on two Graptemys geographica and one Chelydra serpentina.