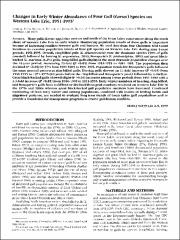 Many gulls (Larus spp.) that nest on and north of the Great Lakes concentrate along the south shore of western Lake Erie in early winter. Monitoring population trends of these gulls is important because of increasing conflicts between gulls and humans. We used data from four Christmas Bird Count locations to examine population trends of four gull species on western Lake Erie during nine 5-year periods, 1951-1995. Overall, ring-billed gulls (Z. delawarensis} were the dominant species (59% of gulls counted) followed by herring (Z. argentatus, 20%), Bonaparte's (Z. Philadelphia, 18%) and great blackbacked (Z. marinus, 0.2%) gulls. Ring-billed gulls displayed the most dramatic population changes over the 45-year period, increasing 23-fold (P <0.05) from 1951-1955 to 1981-1985- The population then declined (P <0.05) by 57% from 1981-1985 to 1991-1995. Population trends for Bonaparte's gulls followed the same general pattern as ring-billed gulls. Herring gulls showed an 11-fold increase (P <0.05) from 1951-1955 to 1971-1975 (10 years before the ring-billed and Bonaparte's peak) followed by a decline. Great black-backed gulls showed slight (P >0.05) increases among 5-year periods from 1951-1990 with a 3.3-fold increase (P <0.05) from 1986-1990 to 1991-1995. Early winter numbers of herring, ring-billed, and Bonaparte's gulls have stabilized or declined from peak numbers recorded on western Lake Erie in the 1970s and 1980s whereas great black-backed gull population numbers have increased. Continued monitoring of both early winter and nesting populations, combined with studies of feeding habits and migratory patterns, are needed to evaluate long-term trends of Great Lakes gull populations and to provide a foundation for management programs to resolve gull-human conflicts.