A Review and Recent Records of the Bigeye Shiner, Notropis boops (Cyprinidae), in Ohio 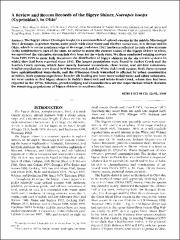 The bigeye shiner (Notropis boops^) is a common fish of upland streams in the middle Mississippi River drainage. It prefers warm, quiet pools with clear water and silt-free substrates. It is threatened in Ohio, which is on the northern edge of its range, and since 1941 has been collected in only a few streams in the southwestern part of the state. In order to assess the current status of the bigeye shiner in Ohio, we examined the extensive stream fish data base for the whole state. We then conducted seining surveys from 1985-1995 to more fully document the distribution of bigeye shiners in the six stream systems in which they had been reported since 1941. The largest populations were found in Turkey Creek and the Sunfish Creek system, which have mostly forested watersheds, clear water, and silt-free substrates. Smaller populations were found in O'Bannon Creek and the White Oak Creek system. Both these systems have agriculturalized watersheds, and the O'Bannon Creek watershed is affected by urban construction activities. Both systems experience heavier silt loading and have more turbid water and siltier substrates. We were unable to find bigeye shiners in Paddy's Run Creek and Scioto Brush Creek, where they had been reported in the 1970s. Siltation, gravel dredging and channelization are the major factors which threaten the remaining populations of bigeye shiners in southern Ohio.