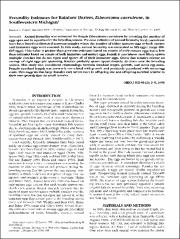 Annual fecundity was estimated for female Etheostoma caeruleum by counting the number of eggs spawned in aquaria over the breeding season. Previous estimates of annual fecundity for E. caeruleum have been based on dissected museum samples where the number of either matures eggs or both mature and immature eggs were counted. In this study, annual fecundity was estimated as 309 eggs (range 180-607 eggs). This value is greater than previous estimates based on counts of only mature eggs but is less than estimates based on counts of both immature and mature eggs. Female E. caeruleum most likely spawn multiple clutches but do not ripen and spawn all of their immature eggs. Given that females release an average of eight eggs per spawning, females probably spawn approximately 39 times over the breeding season. This study also considered relationships between standard length, growth, and mean egg mass. Female standard length was inversely correlated with growth and positively correlated with mean egg mass. This suggests that large females may invest more in offspring size and offspring survival relative to their own growth than do small females.