Promise and Practice: The Dichotomous Nature of Partnership Between Parks and Recreation and Higher Education in Northeastern Ohio 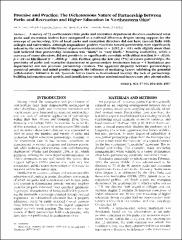 A survey of 73 northeastern Ohio parks and recreation department directors confirmed what parks and recreation leaders have recognized as a national dilemma; despite strong support for the concept of partnership, 93% of local parks and recreation directors did not have current links with colleges and universities. Although respondents' positive reactions toward partnership were significantly related to the perceived likelihood of partnership creation (r = .5282,/? = .01), only slightly more than half believed that partnership formation was likely to very likely. Funding availability, while a concern of many directors, did not positively or significantly correlate with either reaction (r = -.0156, p = .01) or likelihood (r = -.0860,/? = .01). Further, given the low rate (7%) of extant partnerships, the proximity of parks and recreation departments to postsecondary institutions (mean = 4 institutions per department) did not promote partnership creation. The apparent disparity between partnership's perceived promise and actual practice suggests the influence of mediating factors inhibiting the potential collaborators' initiative to act. Systemic forces (such as institutional inertia), the lack of partnershipbuilding information and models, and insufficient or unclear motivational factors may play pivotal roles.