A Survey of the Branchiopod Crustaceans of Ohio 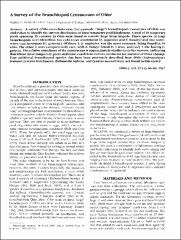 A survey of the non-cladoceran (for example, large) branchiopod crustaceans of Ohio was undertaken to identify the current distribution of these temporary pool inhabitants. A total of 49 temporary pools spanning 15 counties in Ohio were found to contain large branchiopods. Three species of large branchiopods were identified: two cold-water anostracans (E. neglectus and E. bundyi) and one warmwater conchostracan (C. gynecia}. Of these 3, E. neglectus was the most common, being found in 46 sites. The other 2 were comparatively rare, with E. bundyi found in 4 sites, and only 1 site having C. gynecia. The relative abundance of the anostracans is approximately similar to earlier surveys, indicating that where these temporary pools still exist, conditions remain conducive for survival of these shrimp. Four additional branchiopod species that have been previously described from Ohio (Eubranchipus holmani, Lynceus brachyurus, Eulimnadia inflecta, and Cyxicus morset) were not found in this survey.