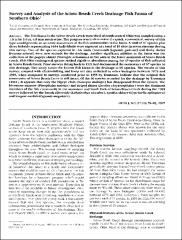 The fish fauna in the Scioto Brush Creek watershed of south-central Ohio was sampled using a 1.8 m by 3-0 m, 4.8 mm mesh seine. The purpose was to determine if a quick, economical, survey of this type would provide an accurate assessment of the fish communities in the basin. A total of 47 species plus three hybrids representing 6684 individuals were captured at a total of 19 sites in seven streams during this survey. Two of the species captured in this study (warmouth [Lepomis gulosus] and dusky darter [Percina scieraj) were new records for the drainage. Another significant addition to the fauna was the collection of the popeye shiner (Notropis ariommus) at five sites in the lower mainstem of Scioto Brush Creek. This Ohio endangered species ranked eighth in abundance among the 47 species of fish collected in Scioto Brush Creek. Prior surveys dating back to 1921 had documented the occurrence of 67 species in this drainage. This study raises the known fish fauna in the drainage to 69 species. The results of this survey, coupled with electrofishing and hoop net data collected by other biologists between 1979 and 1985, when compared to surveys conducted prior to 1955 by Trautman, indicate that the original fish community of Scioto Brush Creek is still intact. Of the 60 species recorded for the drainage by Trautman (1981), it appears that only the bigeye chub (Notropis amblops) has disappeared from the system. The bluntnose minnow (Pimephales notatus) and striped shiner (Luxilus chrysocephalus) were the dominant members of the fish community in the mainstem and South Fork of Scioto Brush Creek during the 1985 survey followed by the brook silverside (Labidesthes sicculus), spotfin shiner (Cyprinella spilopterd) and longear sunfish (Lepomis megalotis).