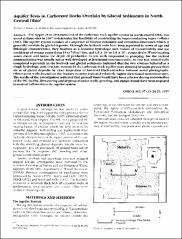 The upper 25 to 30 meters (m) of the carbonate-rock aquifer system in north-central Ohio was tested at three sites in 1987 to determine the feasibility of constructing the Superconducting Super Collider (SSC). The aquifer system consists of a sequence of Silurian dolomites and Devonian limestones which is generally overlain by glacial deposits. Although the bedrock units have been separated in terms of age and lithologic characteristics, they function as a common hydrologic unit. Values of transmissivity and the coefficient of storage range from 15 to 745 mVday, and 1.8 X 105 to 9.8 X 10 4, respectively. Water-bearing zones above and below the depth of production in test wells responded to pumping, but the vertical communication was usually not as well developed as horizontal communication. In one test, nested wells completed separately in the bedrock and glacial sediments indicated that the two systems behaved as a single hydrologic unit. Fracture systems in the carbonate-rock aquifer were detected beneath greater than six m of glacial deposits by close inspection of low-level black-and-white infrared aerial photographs. Observation wells located on the fracture systems indicated relatively higher directional transmissivities. The results of the investigation indicated that ground water would have been a factor during construction of the SSC facility. Dewatering and depressurization wells, grouting, and sumps would have been required to control inflows from the aquifer system.