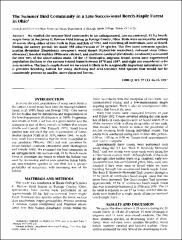 We studied the summer bird community in an unfragmented, late-successional, 61 ha beechmaple forest at the James H. Barrow Field Station in Portage County, Ohio. Birds were surveyed by making 30 counts along either of two trails in June and July of 1992, and recording all individuals seen or heard. During the survey period, we made 958 observations of 29 species. The five most common species, acadian flycatcher (Empidonax virescens), wood thrush (Hylocichia mustelina), red-eyed vireo (yireo olivaceus), hooded warbler (Wilsonia citrina), and northern cardinal (Cardinalis cardinalis') accounted for over 50% of the observations made. Of the 15 Neotropical migrants found, seven have experienced population declines in the eastern United States between 1978 and 1987, and eight are considered to be area-sensitive. The beech-maple forest we surveyed is likely to be a regionally important natural area, for it provides breeding habitat for many declining and area-sensitive bird species that would not be consistently present in smaller, more disturbed forests.