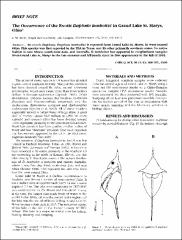 An exotic Daphnia, Daphnia lumholtzi is reported from Grand Lake St. Marys, in west-central Ohio. This species was first reported in the USA in Texas, and 16 other primarily southern states. Its native habitat is east Africa, south-west Asia, and Australia. D. lumholtzi has appeared in zooplankton samples from Grand Lake St. Marys in the late summer and fall yearly since its first appearance in the fall of 1993.