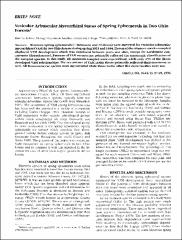 Nineteen spring ephemerals (7 monocots and 12 dicots) were surveyed for vesicular-arbuscular mycorrhizae (VAM) in two Ohio forests during spring 1993 and 1994. Eleven of the nineteen species sampled displayed VAM development which was consistent between years and sites, except for Cardamine concatenata (Brassicaceae). Patterns of VAM occurrence primarily reflected the taxonomic classification of the sampled species. In this study, all monocots sampled were mycorrhizal, while only 25% of the dicots developed VAM relationships. The occurrence of VAM in the dicots primarily reflected their taxonomy as well. All Ranunculaceae species were mycorrhizal while those in the other five dicot families were not.