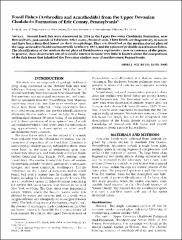 Several fossil fish were discovered in 1994 in the Upper Devonian Chadakoin Formation, near Howard Falls, just outside of Edinboro, Erie County, Pennsylvania. These fossils are fragmentary in nature and have been described based on their morphology. They are identified as the median dorsal plate of the large arthrodire Dunkleosteus terrelli Newberry, 1873, and the spines of probable acanthodian fishes. The identification of the median dorsal plate of Dunkleosteus represents a new occurrence of the genus. In general, these discoveries are of scientific interest because very little is known about the composition of the fish fauna that inhabited the Devonian shallow seas of northwestern Pennsylvania.