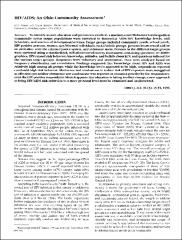 To identify unmet education and prevention needs in a medium-sized Midwestern metropolitan community seven target populations were surveyed to determine AIDS/HIV knowledge levels, risk behaviors, and sources of information/services. Target groups included community youth, school youth, HIV-positive persons, women, gay/bisexual individuals, racial/ethnic groups, persons incarcerated and/or on probation with the criminal justice system, and substance users. Persons in the different target groups were surveyed using a standardized, self-administered survey instrument containing questions on demographics; HIV-related risk behavior; knowledge, attitudes, and beliefs about HIV; and questions tailored for the various target groups. Responses were voluntary and anonymous. Data were analyzed based on frequency distribution and correlation. Findings suggested that knowledge about HIV and AIDS was relatively high among all groups; while the knowledge levels appeared to be high, respondents reported continued high risk behavior. Abstinence and condom use to reduce risk of HIV exposure were recognized as effective; yet neither abstinence nor condom use was reported as common practice by the respondents, even the HIV-positive respondents. Since it appears that education is failing to effect change, a new approach to bring HIV/AIDS risk reduction to a more personal level must be examined and implemented.