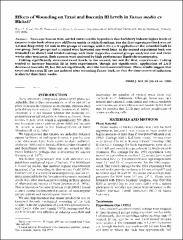 Two experiments were carried out to test the hypothesis that herbivory induces higher levels of taxanes in the bark of two year old Taxus media cv Hicksii cuttings. For the first experiment bark was cut 1.0 mm deep every 5.0 mm in two groups of cuttings; with 0.1% 2,4-D applied over the wounded bark in one group. Both groups and a control were harvested one week later. In the second experiment bark was wounded (as above) and treated cuttings with their respective control groups analyzed one and three weeks after treatment. Bark extracts were analyzed by high performance liquid chromatography. Cutting significantly decreased taxol levels in the second, but not the first, experiment.