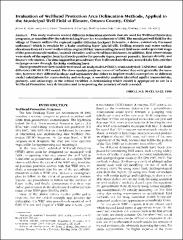 This study evaluates several different delineation methods that are used for Wellhead Protection programs, as mandated by the Safe Drinking Water Act Amendments of 1986. The municipal well field for the village of Elmore utilizes the regional aquifer (Silurian Lockport Dolomite, a dense, extensively fractured carbonate) which is overlain by a leaky confining layer (glacial till). Drilling records and water surface elevations from 444 water wells within a region 330 km2 surrounding the well field were used to generate maps of the potentiometric surface, bedrock elevation and surficial layer thickness. In addition, field observations were made of the aquifer from local rock quarries for porosity types, percent porosity, fracture density, and fracture orientation. The data suggest that groundwater flow is directed northward, toward Lake Erie, and that recharge occurs through the leaky confining layer. Three groundwater flow models were used, an analytical (GPTRAC), semi-analytical (CAPZONE) and finite difference (MODFLOW) model. The three models predicted zones of influence that were generally the same size, however they differed in shape and asymmetry due either to implicit model assumptions or different model calculations for transmissivity and recharge. A sensitivity analysis identified aquifer transmissivity, porosity, and anisotropy as the critical variables in determining which model is appropriate to use in a Wellhead Protection Area delineation and in improving the accuracy of such a model.