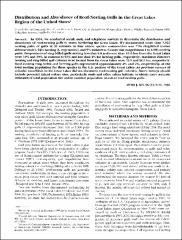 In 1994, we conducted aerial, mail, and telephone surveys to determine the distribution and abundance of roof-nesting gulls in states bordering the Great Lakes. We documented more than 7,922 nesting pairs of gulls at 30 colonies in four states; species composition was 71% ring-billed (Larus delawarensis^, 24% herring (Z. argentatus^, and 5% unknown. Colony size ranged from 1 to 1,003 nesting pairs. Proportions of ring-billed gulls nesting less that 5.0 and more than 10.0 km from the Great Lakes were 31% and 39%, in contrast to 63% and less than 1% for herring gulls, respectively. Maximum distances herring and ring-billed gull colonies were located from the Great Lakes were 23.5 and 58.0 km, respectively. Roof-nesting ring-billed and herring gulls represented approximately 2% and 4%, respectively, of the total nesting population for these species in the U.S. portion of the Great Lakes. As previous surveys of colonial waterbirds in the Great Lakes did not document roof-nesting gull colonies, future surveys should include potential inland colony sites, particularly roofs and other urban habitats, to obtain more accurate estimates of total population size and to monitor population trends of roof-nesting gulls.