Flora of a Diked and an Undiked Southwestern Lake Erie Wetland 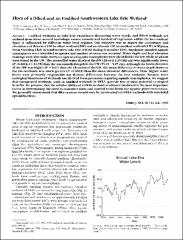 Undiked wetlands in Lake Erie experience fluctuating water levels, and diked wetlands are isolated from these natural hydrologic events. Growth and survival of vegetation within the two wetland types is influenced by different water level regimes. Our objective was to report the occurrence and abundance of flora in a 100 ha diked wetland (DW) and an adjacent 100 ha undiked wetland (UW) at Winous Point Shooting Club in southwestern Lake Erie (SWLE) during September 1991. Randomly sampled aquatic macrophytes were identified to species and number of stems was recorded. Water depth and land elevation readings were also made. Forty-six species of aquatic macrophytes were identified in the DW while no plants were found in the UW. The controlled water depth of the DW (28.40 ± 2.39 [SE] cm) was significantly lower (P <0.0001, t = 11.95) than the uncontrolled depth in the UW (95.41 ± 5.07 cm). Although the basin elevation of the DW was higher (P = 0.01) than the elevation of the UW, the mean difference in water depth between the two wetlands was much greater (P <0.0001) than the mean elevation differences. Thus, higher water levels were primarily responsible for floristic differences between the two wetlands. Because most ecological functions of wetlands are derived from processes requiring aquatic macrophytes, we suggest that unvegetated wetlands, such as undiked wetlands in SWLE, provide few of their potential ecological benefits. We propose that the relative ability of a SWLE wetland to advance landward is the most important factor in determining the need to construct dikes and control water levels for aquatic plant restoration. We generally recommend that dike systems should only be constructed on SWLE wetlands with restricted upland borders.