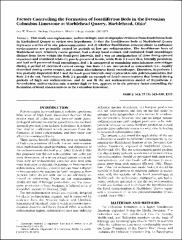 This study uses taphonomic, sedimentologic, and stratigraphic evidence from fossiliferous beds in Marblehead Quarry to review two hypotheses: 1) that the fossiliferous beds at Marblehead Quarry represent a series of in situ paleocommunities, and 2) whether fossiliferous concentrations in carbonate environments are primarily caused by periods of low net sedimentation. The fossiliferous beds of Marblehead were relatively coarse grained, had a sharp basal contact, and contained fossil assemblages distinct from those within the fossil-poor intervals. Bed 1 was an amalgamation of three fining-upward sequences and contained relatively poorly-preserved fossils, while Beds 2-4 were thin, laterally persistent, and had well-preserved fossil assemblages. Bed 1 is interpreted as containing autochthonous assemblages during a period of increased current energy, but Beds 2-4 are interpreted as tempestites (i.e., rapidly deposited during storm events), and contain allochthonous fossil assemblages. Therefore, hypothesis 1 was partially disproved: Bed 1 and the fossil-poor intervals may represent in situ paleocommunities, but Beds 2-4 do not. Furthermore, Beds 2-4 provide an example of fossil concentrations that formed during periods of high net sedimentation, and do not fit the net sedimentation model of hypothesis 2. Nevertheless, sedimentation rate, whether high or low, appears to be the primary factor controlling the formation of fossil concentrations in the Columbus Limestone.