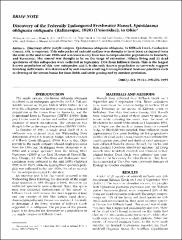 Discovery of the purple catspaw, Epioblasma obliquata obliquata, in Killbuck Creek, Coshocton County, OH, is reported. This subspecies of unionid mollusc was thought to have been extirpated from the state in the mid to late 1800s and was known only from two nonreproductive populations in Kentucky and Tennessee. The mussel was thought to be on the verge of extinction. Fifteen living and 23 dead specimens of this subspecies were collected in September 1994 from Killbuck Creek. This is the largest known population of this rare subspecies and it is the only known population to currently support breeding individuals. It is threatened by soil erosion resulting from agricultural land-use practices such as clearing of the stream banks for farm fields and cattle grazing and by muskrat predation.