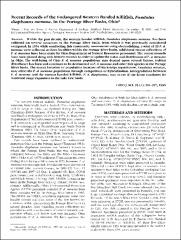 Within the past decade, the western banded killifish, Fundulus diaphanus menona, has been collected on several occasions in the Portage River basin, from which it was previously considered extirpated. In 1994 while conducting fish community assessments using electrofishing, a total of 13 F. d. menona were collected at three localities within the Portage River basin. Additional recent collections of F. d. menona have been made by Ohio Department of Natural Resources personnel. The recent records have been plotted along with historic records in order to update the status and distribution of F. d. menona in Ohio. The well-being of Ohio F. d. menona populations may depend upon several factors. Habitat disturbance has been and continues to be detrimental to F. d. menona and other fish species in the Portage River basin. The recent invasion or population increase of blackstripe topminnow, Fundulus notatus, may affect the F. d. menona population through competition or hybridization. Intergradation between F. d. menona and the eastern banded killifish, F. d. diaphanus, may occur if the latter continues its westward range expansion in the Lake Erie basin.