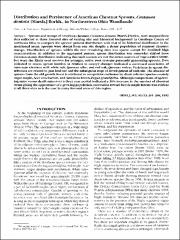 Sprouts and stumps of American chestnut, Castanea dentata [Marsh.] Borkh., were mapped from data collected at three forested sites of varying size and historical background in Cuyahoga County of northeast Ohio to compare the species' present distribution with that of its historical distribution in the mentioned areas. Sprouts were absent from one site despite a dense population of remnant chestnut stumps. Distribution of sprouts within the two remaining sites was sparse except for localized high concentrations. In addition to the aggregated pattern, sprout distribution was somewhat shifted from chestnut stump distribution indicating that such stumps are not the direct sources of regenerative tissue, but were the likely seed sources for younger, active root systems presently generating sprouts. Data collected to assess sprout location in relation to canopy changes indicated a continued association of American chestnut with white oak, Quercus alba, and red oak, Quercus rubra. Variations in sprout distribution are related to past land use and the subsequent stage of development of each site. The absence of sprouts from the old growth forest is attributed to competitive exclusion by shade tolerant species—mainly sugar maple, Acer saccbarum, and American beech, Fagus grandifolia. Although comparisons of sprouting rates versus death rates over a three year period indicated a 30% increase in the number of chestnut stems giving the appearance of a growing population, succession toward beech-maple forests was evident at all three sites as is the case in many forested areas of this region.