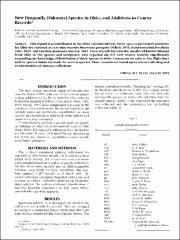 This report is a contribution to the Ohio Odonata Survey. Three species previously unknown for Ohio are reported as new state records: Macromia georgina (Selys), 1878, Gomphaeschna furcillata (Say), 1839, and Libellula deplanata Rambur, 1842. These records increase the number of known Odonata from Ohio to 156 species and subspecies. Also reported are 611 new county records, significantly expanding our knowledge of distribution of these species in Ohio. Comments on early or late flight dates and/or species status are made for several species. These records are based upon recent collecting and re-examination of museum collections.