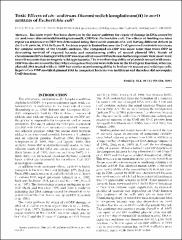 Excision repair has been shown to be the major pathway for repair of damage in DNA caused by cis and trans-diamminedichloridoplatinum(II) (DDP) in Escherichia coli. The effects of limiting excision repair on resistance to DDP was determined using three uvrD mutants of E. coli having different defects in the UvrD protein, DNA helicase II. Excision repair is limited because the UvrD protein function is necessary for catalytic activity of the UvrABC nuclease. The compound ds-DDP was more toxic than trans-DDP in decreasing survival of exposed bacteria and transforming ability of treated plasmid DNA. Repair of chromosomal DNA damaged with DDP was dependent on uvrD function as both compounds were more toxic to uvrD mutants than to isogenic wild-type bacteria. The transforming ability of plasmids treated withtrans-DDP was also decreased further when competent bacteria were deficient in the UvrD gene function, whereas, plasmid DNA treated with cis- DDP had similar transforming ability in bothw#rD mutant and wild-type cells. Repair of ds-DDP modified plasmid DNA in competent bacteria was inefficient and therefore did not require UvrD function.