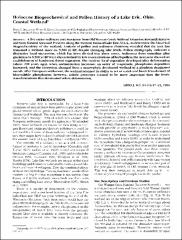 A five meter sediment core was taken from Old Woman Creek National Estuarine Research Reserve and State Natural Area and Preserve along the western basin of Lake Erie, U.S.A., to determine the historical biogeochemistry of the wetland. Analysis of pollen and sediment chemistry revealed that the area has remained a wetland since ca. 5,500 yr BP, despite changing lake levels. Pollen stratigraphy indicates a distinctive local succession, which has been divided into three zones. Sediments from sometime after glaciation to 5,500 yr BP were characterized by low concentrations of herb pollen; the next zone showed an establishment of hardwood forest vegetation. The modern local vegetation developed after deforestation (about 200 years ago), when sedimentation increased an order of magnitude, phosphorus deposition increased, and the ecosystem changed from a macrophyte dominated wetland to a plankton dominated marsh. After European settlement, the wetland retained its ability to act as a sink and biotic transformer of bioavailable phosphorus; however, abiotic processes seemed to be more important than the biotic transformations that dominated before deforestation.