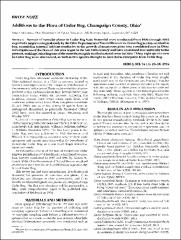 Surveys of vascular plants in Cedar Bog State Memorial were conducted from 1990 through 1992 as part of a larger ecological study by the Ohio Department of Natural Resources. Cedar Bog is a fen, or alkaline bog, containing unusual habitats conducive to the growth of numerous plant taxa considered rare in Ohio. Investigations of the flora of this area began in the late 19th century and have continued intermittently to the present, making Cedar Bog one of the most thoroughly studied natural areas in Ohio. Thirty-eight species new to Cedar Bog were discovered, as well as two species thought to have been extirpated from Cedar Bog.