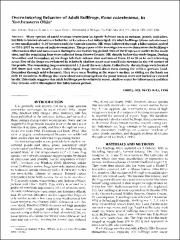 Many species of ranid anurans overwinter in aquatic habitats such as streams, ponds, and lakes, but little is known about their behavior or location when submerged. Six adult bullfrogs (Rana catesbeiana) at two small ponds (-0.25 hectares each) in Summit County, OH, were followed through a hibernation period in 1991/1992 by means of radio transmitters. The purpose of the investigation was to determine the bullfrog's hibernation sites and movements during the overwintering period. Two of the frogs were native to the study sites, and the remaining four were collected from Ottawa County, OH, shortly before the study began. During November and December, all six frogs left their release sites and moved from 33 to 96 m to overwintering areas. Five of the frogs overwintered in relatively shallow areas near small inlet streams in the NW corner of the ponds. The remaining frog overwintered 1-2 m off the west shore. Collectively, the six frogs were located 208 times and were nearly always submerged. Frogs moved about even during the coldest periods (mid-December through mid-February). They were seen floating at the water's surface or sitting on the bank on only 10 occasions. Bullfrogs that were observed submerged on the pond bottom were not buried or covered by silt. This study suggests that adult bullfrogs prefer relatively warm, shallow water for hibernacula and that they remain active throughout the hibernation period.