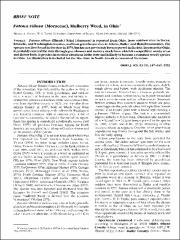 Fatoua villosa (Thunb.) Nakai (Moraceae) is reported from Ohio, from outdoor sites in Butler, Franklin, and Washington counties, and from greenhouse sites in Athens, Butler, and Hamilton counties. The species was first found in the state in 1979, but has not previously been reported in floristic literature for Ohio. It probably entered the state through greenhouses and nursery stock from which it escaped into weedy areas and flower beds. It persists in outdoor situations in the state and is likely to become a common weedy species in Ohio. An illustration is included for the first time in North American botanical literature.