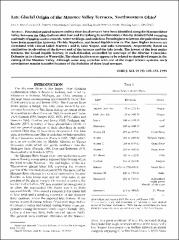 Four major paired terraces and six short local terraces have been identified along the Maumee River valley between the Ohio-Indiana state line and Perrysburg in northwestern Ohio by detailed field mapping and study of gaging-station records, water-well logs, and soils data. From highest to lowest, the paired terraces have been named the Antwerp, Florida, Napoleon, and Grand Rapids terraces. The three higher terraces are correlated with Glacial Lakes Warren I and II, Lake Wayne, and Lake Grassmere, respectively, based on similarities in elevation of the lowest end of the terraces and the lake levels. The lowest of the four major terraces, the Grand Rapids Terrace, is rock-defended, controlled by outcrops of the Silurian Tymochtee Dolomite in its channel at Waterville. The short local terraces appear to be related to short-lived stages in the cutting of the Maumee Valley. Although some may correlate with one of the major terrace systems, such correlations remain tentative because of the isolation of these local terraces.