Decline in the Index of Biotic Integrity of Delaware Run, Ohio, over 50 Years 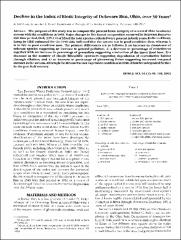 The purpose of this study was to compare the present biotic integrity of a central Ohio headwater stream with the conditions in 1940. Major changes in fish faunal composition occurred in Delaware Run over this time period. Only 33% (11 of 33) of the totalspecies collected were present in both years. Indices of biotic integrity (IBI) estimated for the 1940 data indicated that the stream was in good condition then, whereas it is in fair to poor condition now. The primary differences are as follows: 1) an increase in abundance of tolerant species suggesting an increase in general pollution, 2) a decrease in percentage of insectivores together with an increase in percentage of generalists suggesting a reduction of the insect food base, 3) a decrease in the number of simple lithophilic spawners suggesting degradation of reproductive habitat through siltation, and 4) an increase in percentage of pioneering fishes suggesting increased temporal stresses in the stream. Although the stream was not in pristine condition in 1940, it has been degraded further in the past half century.